Strangely for something with as much sentimental potential as Christmas, there is only a handful of really classic Christmas movies. Yet, every year, this buff draws up a list of Christmas movies to watch in the run-up to the big day – and every year she fails miserably to get through them all.

The viewing itinerary usually kicks off with a little-known 1945 comedy called The Cheaters, which is getting a rare screening on Channel 4 this weekend. With a screwball cast that includes the elephantine Eugene Pallette and the twittery Billie Burke (best remembered as Glinda from The Wizard of Oz), it’s about a family of hard-up socialites who – in order to impress their daughter’s rich suitor – take in the down-and-out Joseph Schildkraut over Christmas, and learn a thing or two about dignity from him. 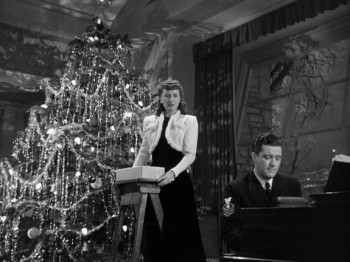 The Cheaters makes a nice double bill with Christmas in Connecticut (pictured), another rarely shown 1945 comedy, this time about a sophisticated magazine columnist (Barbara Stanwyck) forced to live up to her phoney reputation as a Nigella-style domestic goddess when her editor decides to spend the holidays at her country cottage.

Continuing the unwelcome guest theme, The Man Who Came to Dinner (1941) is one I always manage to squeeze in to the viewing schedule. A gloriously funny comedy, it stars Monty Woolley as the obnoxious “idol of the airwaves” Sheridan Whiteside (a character based on the humorist Alexander Woollcott) who, during a lecture tour, breaks his leg and has to spend his recovery – and Christmas – at the home of the unlucky mid-west family outside whose house he slipped. 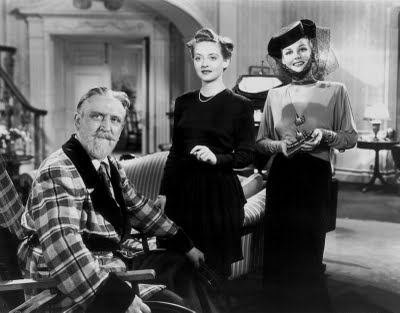 “Christmas may be postponed this year,” says one gossip column reporting the accident which has left the Stanley family confined to the upstairs quarters of their own home. The snazzy script, packed with one-liners, is a joy and the performances – by Billie Burke (again), Bette Davis, chic glamourpuss Ann Sheridan (my Christmas style icon), the wonderful character actress Mary Wickes and Jimmy Durante (playing a character based on Harpo Marx) – are as sparkling as a glass of Christmas bubbly.

Versions – live and animated – of A Christmas Carol abound, but the most atmospheric and haunting of all is the 1951 British classic, Scrooge, with the peerless Scots actor Alastair Sim gloriously dour as the miser who claims that “Christmas is a humbug” until he is visited by three spirits on Christmas Eve

and realises that friendship and love are worth more than money.

Wash that one down with the gentler The Bishop’s Wife (1947), a grown-up romantic fantasy in which Cary Grant stars as a particularly debonair and charming angel named Dudley, who answers the prayers of a stressed-out clergyman (David Niven)and his neglected wife (Loretta Young) at Christmas-time, and leaves a trail of swooning ladies in his wake.

Or settle down with family favourite Miracle on 34th Street (1947 – a vintage year for Christmas movies) in which department store Santa Edmund Gwenn has to prove that he’s the real McCoy to a non-believing seven-year-old (Natalie Wood).

Heartwarming Christmas scenes feature in plenty of movies, but the ones worth digging out in the run-up to midnight are Little Women (any of the three versions will do, as long as you have your hankies handy) and Meet Me In St Louis (1944).

Although it covers a whole year in the lives of the characters it depicts, Meet Me In St Louis easily qualifies as a festive film: not only does it embody all the sentiments of the season, but it also features Judy Garland introducing the beautiful song Have Yourself a Merry Little Christmas which is guaranteed to

jerk a few buckets’ worth of tears.

The hours spanning Christmas Eve and Christmas morning should be spent in the company of Clarence the Angel, Zuzu, George, Uncle Billy and everyone else in Frank Capra’s evergreen It’s a Wonderful Life (1946) – the definitive Christmas movie.

And, if by December 27, I feel that I’ve overdosed on the old Christmas spirit, Billy Wilder’s The Apartment (1960) will provide just the right amount of cynicism to prepare me for the horrors of Hogmanay…

Tagged as Christmas in Connecticut, Christmas movies, Eugene Pallette, It's a Wonderful Life, Meet Me in St Louis, Miracle on 34th Street, Monty Woolley, Scrooge, Sheridan Whiteside, The Apartment, The Bishop's Wife, The Cheaters, The Man Who Came to Dinner

Newsflash: Meet Me In St Louis on the Movie Cafe

I was invited on to BBC Radio Scotland’s Movie Cafe today to chat about Meet Me In St Louis: you can listen to it here. 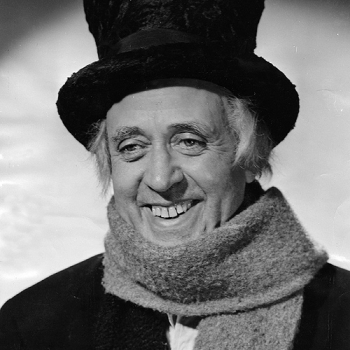 It’s 60 years since Alastair Sim played Ebenezer Scrooge on the big screen and although there have been countless versions of Charles Dickens’s A Christmas Carol over those six decades, not one has come close to Sim’s 1951 film, Scrooge. And, yes, I’m referring to such illustrious actors as Albert Finney, Michael Caine, George C Scott and, er, Mr Magoo.

I’ll be honest: I’ve never read A Christmas Carol. So whether Dickens described Scrooge exactly as Sim plays him – a cowardly, emotional cripple who has buried his humanity under an ever-increasing obsession with money and whose frozen heart and icy personality start to thaw when he’s confronted with key moments from his past – I could not say. What I do know is that no other actor whom I’ve seen playing Scrooge has moved me as Sim does – and no other Christmas film, apart from It’s a Wonderful Life, leaves me on such an euphoric high.

Edinburgh-born Alastair Sim not only made the part of Scrooge his own (so much so that, 20 years after the film, he revisited the role when he headed the voice cast of Richard Williams’s cartoon version); he seems to have been born to play it. The part calls on a wide range of emotions – Scrooge undergoes a 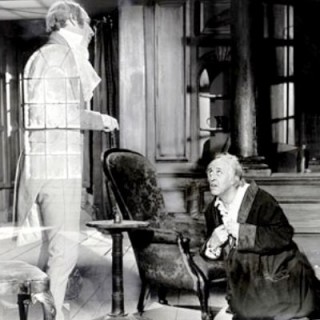 massive, but gradual, character transformation – but the 1951 film benefits, as no other does, from Sim’s unique gift of conveying glee. Sim’s widow, Naomi, wrote that she liked “most” of the film, “but particularly the scenes of Scrooge’s redemption .. where Alastair put so much of himself into the joy of having the scales lifted from his eyes and of being given another chance.”

We’d seen Sim’s irrepressible giggles before but there is nothing – Jimmy Stewart’s jubilant “Merry Christmas Bedford Falls” sprint through Bedford Falls apart – as uplifting or infectious as his hysterical fit of giddy mirth at the climax of Scrooge. It’s the cinematic equivalent of ecstasy.

And it’s not only this dazzling yet unshowy central performance that makes the film a winner. The supporting cast – a veritable Who’s Who of British acting talent – is ace; Brian Desmond Hurst’s direction is superb and Victorian London is beautifully evoked both visually and by the sombre yet eerie music.

Anyone who fell under the spell of the charismatic John Wilson and his sensational orchestra after watching them performing their concert of classic songs from MGM musicals would know that that show was a hard act to follow. The MGM concert featured some of the greatest numbers ever written for the movies and in the most sumptuous arrangements; and the Glasgow concert last November was spine-tingling from start to finish.

This year’s tour – which rolled into the Usher Hall on Wednesday – focused on songs from musicals made by every other studio. RKO, Disney, Paramount, Warners and Fox were all represented (rather bizarrely in a couple of the choices) – and while the concert featured fewer thrills than last year’s, it still produced magical moments a-plenty from the swinging 42nd Street which introduced the quartet of singers through to such stand-out duets as Noah Stewart and Sarah Fox’s electrifying One Hand, One Heart and Stewart’s commanding solo on Sigmund Romberg’s Serenade.

These two more operatic singers produced the showstopping vocal moments; Kim Criswell and Matthew Ford were at times overpowered and overshadowed by the orchestra behind them, notably on the exquisite The Man Who Got Away.

Indeed, the John Wilson Orchestra – the happiest and most animated orchestra you’re likely to see – was THE main star of the evening: not only did it produce a gorgeous and luxurious sound but its choreographed bow-taking (each section did a wee comedy turn) couldn’t have been better staged by the great Busby Berkeley himself …

* Published in The Scotsman, Friday December 9.